Papua New Guinea has strengthened its surveillance system for tuberculosis (TB) under the National TB Program. This paper provides an overview of TB surveillance data at the national and subnational levels from 2008 to 2016.

An analysis of TB data from the national surveillance system has highlighted critical areas for improvement. A low population-screening rate, a high proportion of pulmonary TB cases without sputum test results and a low treatment success rate suggest areas for improvement in the National TB Program. Our additional subnational analysis helps identify geographical and programmatic areas that need strengthening and should be further promoted to guide the programme's direction in Papua New Guinea.

This paper provides an overview of national and subnational TB surveillance data in Papua New Guinea, from the inception of the DOTS strategy in 2008 to 2016. The results are expected to facilitate better understanding of TB epidemiology in Papua New Guinea, help identify programmatic gaps and inform actions.

We conducted a retrospective descriptive analysis of TB cases and treatment outcomes using routine surveillance data from the national TB database for the period 2008–2016. TB laboratory results, case notifications, HIV testing results and treatment outcomes were analysed by disease category, geographic areas and demographic variables. Papua New Guinea has a decentralized health-care system; TB services are delivered by provincial and local governments under policies set by the National Department of Health.2 The National TB Program defined a basic management unit (BMU) as the initial point of TB data collection. There are approximately 275 BMUs and 114 laboratories with TB testing capacities with varying catchment populations across 22 provinces. Recording and reporting formats are in line with WHO recommendations.3 The BMU reports are consolidated into a standardized report that is submitted quarterly to the provincial health office and to the National TB Program at the National Department of Health. The aggregated national database is maintained in Excel.

We obtained case-notification and treatment-outcome data from the aggregated national database. Population data were projected using 2000 and 2011 census data;4,5 age- and sex-disaggregated population data for 2015 were sourced from LivePopulation.com.6 To assess case-finding efforts, we calculated a population-screening rate,7 which we defined as the number of people with presumptive TB examined by smear microscopy divided by the total population in each year. The smear-positivity rate was defined as the number of smear-positive patients divided by the total number of people examined for TB. Treatment outcomes were classified as per WHO definitions as cured, treatment completed, treatment failed, died, lost to follow-up and not evaluated. Treatment success was defined as the sum of cured and treatment completed.3 R version 3.4.1 was used for data analysis and visualization. QGIS version 2.18 was used to produce maps.

As this report used routinely available data and no personal identifying information was collected, ethical clearance was not required according to local regulations. 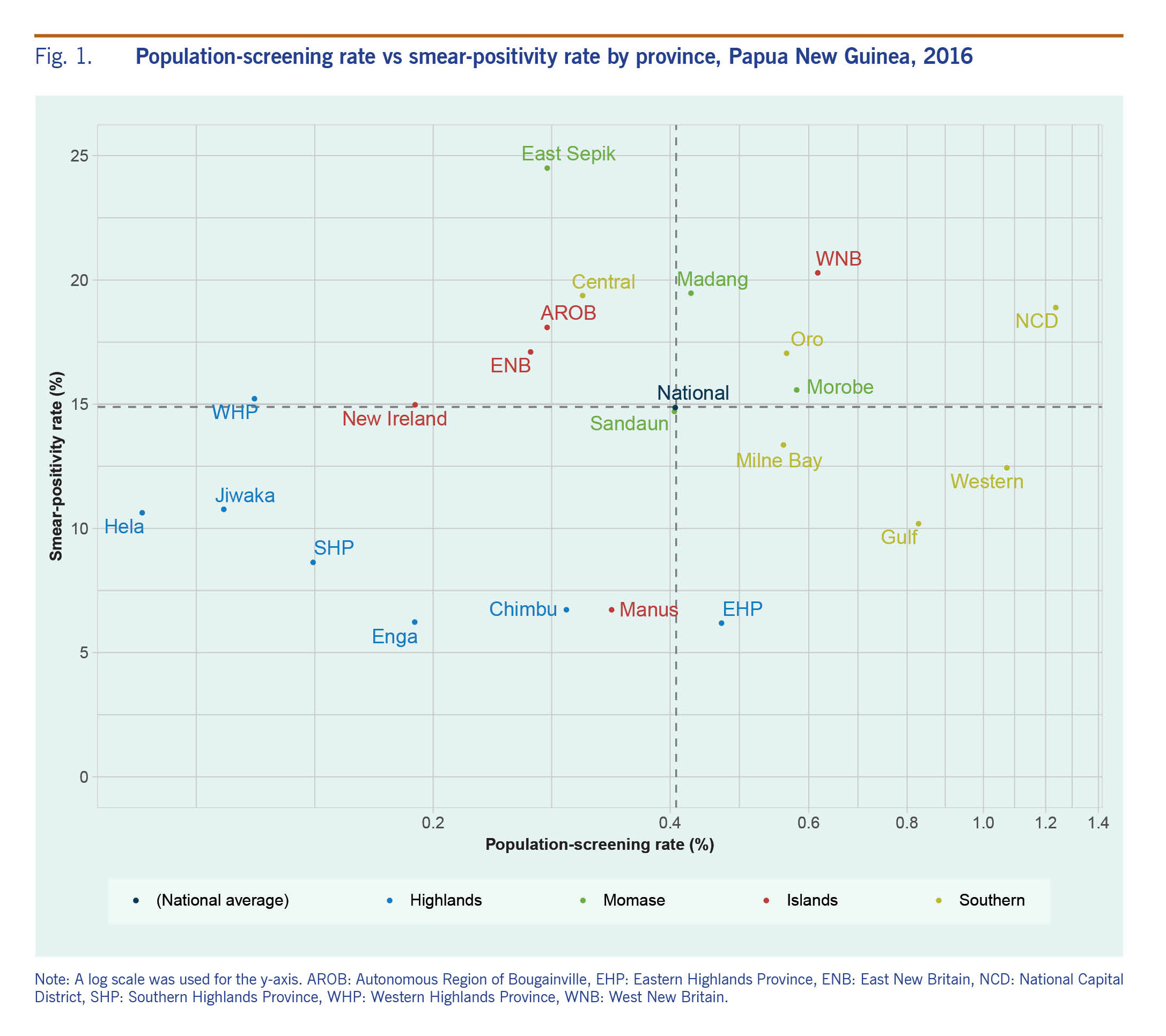 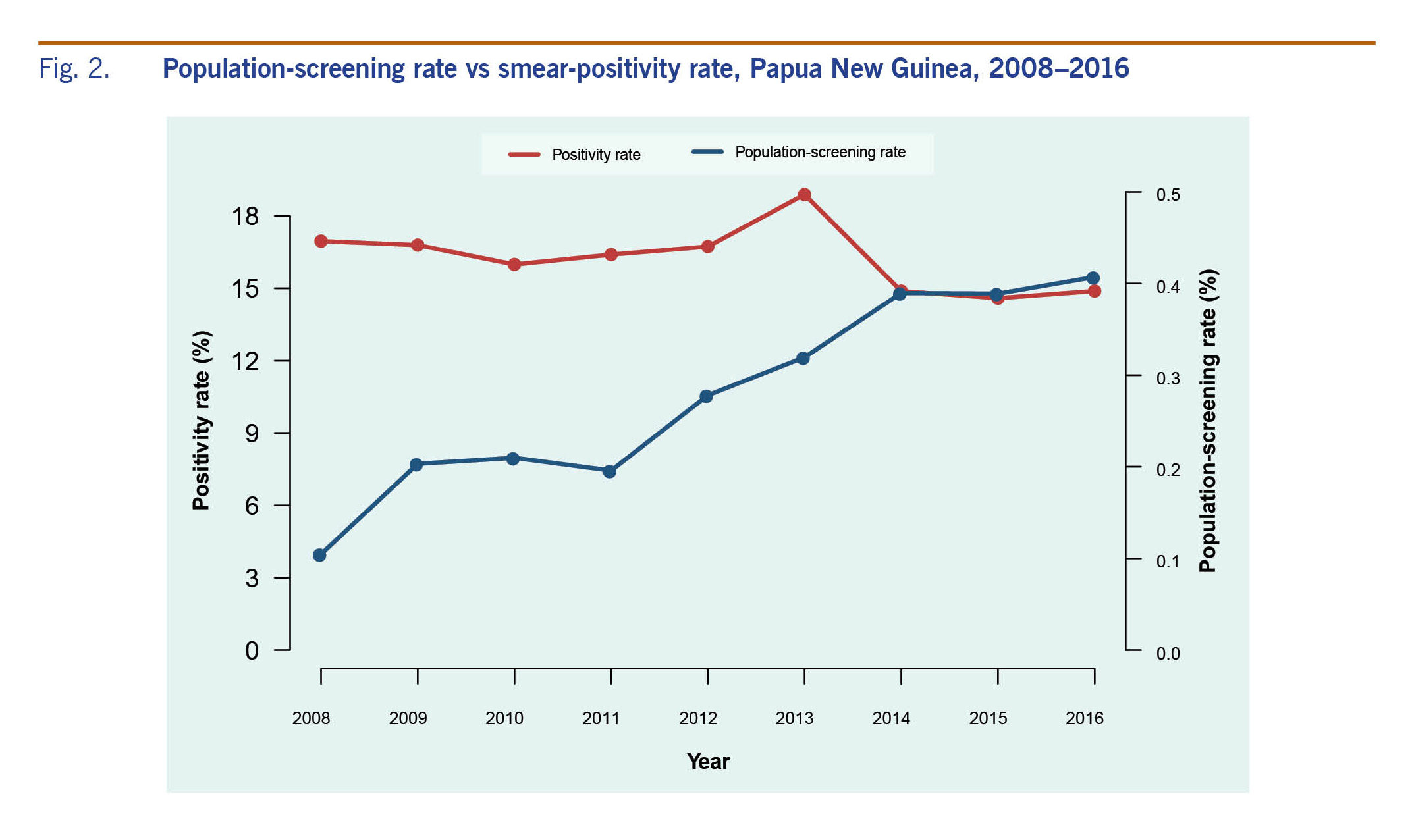 Of all TB cases, 34.8% were tested for HIV with variations at the subnational level ranging from 3% in Central Province to 86.4% in Jiwaka Province (Table 1). The regional testing rate was highest in the Highlands (45.7%), with two of its provinces (Enga and Jiwaka) achieving an HIV testing rate of ≥80%. The HIV testing rate was the lowest in the Islands (11.4%). In 2016, 7.1% of the notified TB patients who were tested for HIV were HIV positive. HIV positivity ranged from 0% in Sandaun Province to 28.6% in Manus Province. Six provinces had HIV positivity rates of 10% or more: Chimbu, Enga, East New Britain, Manus, Central and Oro (Table 1). In this paper, we report national and subnational TB surveillance data that provide an overview of the TB epidemiological and programmatic situation in Papua New Guinea over nine years. From 2008 to 2012, the country succeeded in expanding DOTS and strengthening the national surveillance system to capture nationwide data. Improved case-finding efforts resulted in a doubling of population screening from 0.2% in 2011 to 0.4% in 2014. The population-screening rate has remained static since 2014, and the rate was found to be low compared to other countries such as Cambodia (1.1% in 2013)7 and Tajikistan (0.57% in 2013).8 The programme in Papua New Guinea might not be reaching hard-to-reach populations possibly due to the policy to focus on a limited number of health centres.9

In the setting of an effective TB programme, the smear-positivity rate is inversely proportional to the population-screening rate.7 In Cambodia, the smear-positivity rate declined from 29% in 2001 to 8% in 2013 along with an increased screening rate.7 In contrast, the smear-positivity rate in Papua New Guinea did not decrease considerably, indicating that improved case detection had a limited impact on reducing infectiousness or that only highly presumptive cases were tested, leading to missed cases. Delayed diagnoses (due to limited access to health facilities and microscopy centres) and low treatment success rates likely contribute to high smear positivity. Papua New Guinea has only 114 microscopy facilities across 275 BMUs with weak referral systems, resulting in overreliance on clinical diagnosis. These health systems gaps can also account for the high proportion of pulmonary TB cases without sputum test results (26.6%) and the low proportion of bacteriologically confirmed TB among pulmonary TB cases (25.9%) compared to 38% in the Western Pacific Region and 57% globally.1

In parallel with increased population-screening rates, case notification rates steadily increased from 2008 to 2014, spiked in 2012 and plateaued in 2014. The highest case notification rates were in the 15–64-year-old age group, diverging from the pattern of highest case notification rates in older populations seen in most high-burden countries in the Western Pacific Region.10 Similarly, the proportion of paediatric TB in Papua New Guinea (26.7%) was found to be higher than other high-burden countries in the Western Pacific Region.11 Paediatric TB represents recent transmission and can be a sentinel marker of disease transmission.12,13 Although over-diagnosis is possible, the large proportion of paediatric TB cases indicates ongoing community transmission. We believe that this calls for improvements in early case finding and appropriate community preventive measures, including contact investigation.

Without additional information, we cannot determine the causes of regional variations in TB case notification. The increased case notification rate in the Southern Region might reflect might reflect increased true TB incidence or improved programme activities, or both. Given Papua New Guinea's rich regional sociocultural diversity, different factors can affect an individual's TB risk and health-seeking behaviours as well as a programme's performance measures in different ways. Ultimately, these differences may lead to regional differences in case notification rates.

The high proportion of pulmonary TB cases without sputum test results is a major barrier in understanding TB epidemiology in Papua New Guinea. Many factors could have contributed to this high proportion, including limited accessibility to a TB laboratory and unreliable sputum transport systems.14 Without increasing the number of quality-assured functional TB laboratories, the challenge to increase bacteriological confirmation of TB will remain.

Treatment success did not improve during the study period; the national average remained around 65%, far below the global target of 90%,16 and the Western Pacific Region rate of more than 85%.1,10 None of the regions achieved the >85% treatment success target. Loss to follow-up continues to be a major challenge that has likely resulted in an underreporting of deaths. New smear-positive cases had better outcomes compared to re-treatment cases but did not reach the global target. To improve treatment outcomes, further action is needed to strengthen patient support, including daily treatment, monitoring, counselling and continued efforts to strengthen the health system and address socioeconomic and physical barriers to accessing TB services.17 Family DOT and self-administration are currently practised in Papua New Guinea but have not led to improved treatment success rates. Revisiting the care modality by strengthening community involvement and using an informal health workforce for treatment support is warranted. To improve access to TB treatment, it is essential not only to increase the number of BMUs but also to advance integrated service delivery through the full network of public health facilities, including aid posts (lowest-level public health facility) in communities.

This report has several limitations. An analysis of drug-resistant (DR-TB) was not included because a nationwide data collection system for DR-TB has not been established. Laboratory data used in the analysis were limited to smear microscopy results since data on GeneXpert and culture tests were not captured in the surveillance system. Data quality might have been an issue, especially as the surveillance system was being established, and the reporting rate was low between 2008 and 2012. Hence, trends in those years should be interpreted with caution. In addition, a high percentage of pulmonary TB cases without sputum test results hindered the interpretation of results.

Despite these limitations, we have provided an overview of TB surveillance data and identified patterns in TB epidemiology and programmatic performance in Papua New Guinea. In particular, subnational-level analysis helped identify geographical and programmatic areas that can be prioritized for improvement.7,18 The use of subnational data should be further strengthened and routinely performed for operational planning and implementation of effective TB programmes in Papua New Guinea.

The authors have no conflicts of interest.

The authors wish to thank all health-care workers who provide TB diagnosis and treatment services in Papua New Guinea. The authors extend their thanks to all staff members of national and provincial teams working on the National TB Program of Papua New Guinea for their tremendous efforts in data collection and reporting.